Tetsuhiko is a really good-looking guy.

Tetsuhiko looks good, but tends to enjoy the situations that Sueharu gets in. He always stay on the side his can get some benefit.

Tetsuhiko has been three-timing girls, but as he was eventually caught, he became known for his "trash" behavior and hated by the girls. Every time he tries to talk to a girl from his class would result in them complaining or insulting him. Because of that he started to look for girls from other schools where he states he is even seven-timing them.

He is easily able to read Sueharu Maru and realize his love interest and his plans for the Confession Festival. 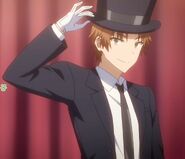 Add a photo to this gallery

Add a photo to this gallery

Retrieved from "https://osamake.fandom.com/wiki/Tetsuhiko_Kai?oldid=1491"
Community content is available under CC-BY-SA unless otherwise noted.